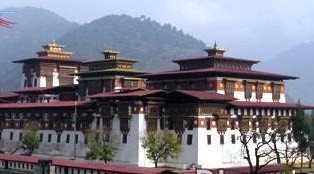 Bhutan is a Buddhist kingdom on the Himalayas eastern edge is known for its monasteries fortresses (or dzongs ) and dramatic landscapes that  range from subtropical plains to steep mountains and valleys . In the high Himalayas peaks such as 7326m Jomolhari are popular trekking destinations . Paro taktsang monastery (also known as tiger’s nest ) clings to cliffs above the forested Paro valley . Kingdom of Bhutan is a Landlocked Country in South Asia at the eastern end of the Himalayas. It is bordered to the north by China and to the south, east and west by India. To the west, it is separated from Nepal by the Indian state of Sikkim, while farther south it is separated from Bangladesh by the Indian states of Assam and West Bengal. Bhutan`s Capital and largest city is Thimphu.

Bhutan's climate is as varied as its altitudes and, like most of Asia, is affected by monsoons. Western Bhutan is particularly affected by monsoons that bring between 60 and 90 percent of the region's rainfall. The climate is humid and subtropical in the southern plains and foothills, temperate in the inner Himalayan valleys of the southern and central regions, and cold in the north, with year-round snow on the main Himalayan summits.

Temperatures vary according to elevation. Temperatures in Thimphu, located at 2,200 meters (7,218 ft) above sea level in west-central Bhutan, range from approximately 15 to 26 °C (59.0 to 78.8 °F) during the monsoon season of June through September but drop to between about −4 and 16 °C (24.8 and 60.8 °F) in January. Most of the central portion of the country experiences a cool, temperate climate year-round. In the south, a hot, humid climate helps maintain a fairly even temperature range of between 15 and 30 °C (59 and 86 °F) year-round, although temperatures sometimes reach 40 °C (104 °F) in the valleys during the summer.

Bhutan has a rich and unique cultural heritage that has largely remained intact because of its isolation from the rest of the world until the early 1960s. One of the main attractions for tourists is the country's culture and traditions. Bhutanese tradition is deeply steeped in its Buddhist heritage. Hinduism is the second most dominant religion in Bhutan, being most prevalent in the southern regions. The government is increasingly making efforts to preserve and sustain the current culture and traditions of the country. Because of its largely unspoiled natural environment and cultural heritage, Bhutan has been referred to as The Last Shangri-la.

Places of Interest in Bhutan

The first thing you will notice as you disembark is the transparent purity of air and the absence of noise. The Paro Valley has kept its bucolic nature in spite of the airport and the existence of development projects.

Places to visit in Paro:

Thimphu lies in a wooded valley, sprawling up a hillside on the West Bank of the Thimphu Chhu [Chhu means River]. Thimphu is unlike any other world capital. Small and secluded the city is quiet and there are never the traffic jams familiar in other Asian Capitals.

Places to visit in Thimphu:

Rinchen build a temple there which can still be seen today opposite to the great Dzong. Shabdrung Nawang Namgyel a key figure in the History of Bhutan built the Punakha Dzong and his body is preserved in one of the Dzongs temples, Machen Lhakhang. The Dzong was damaged six times by fire, once by floods and once by earthquake. The coronation of Ugyen Wangchuk, the first king of Bhutan, took place at Punakha Dzong on 17th December 1907.

His small modern town in the south is the gateway of Bhutan for overland travelers. Like all other border towns, it is also a prelude. Phuntsholing is also a fascinating mixture of Bhutanese and Indian, a lively center for the mingling people, languages, customs and goods. On top of a low hill at nearby Kharbandi, a small Gompa situated in a garden of tropical plants and flowers overlooks the town and surrounding plains.

The Amo Chu, commonly known as the Torsa river flows alongside this town and it is favorite spot for fisherman and the picnickers. From Phuntsholing, the road winds north over the southern foothills, through lush forested valleys and around the rugged north-south ridges of the inner Himalayas to the central valleys of Thimphu and Paro.

Trongsa means 'the new village' and the founding of Trongsa first dates from the 16th century which is indeed relatively recent for Bhutan. It was the Drukpa lama, Ngagi Wangchuk (1517-54), the great grandfather of Shabdrung Nawang Namgyel, who founded the first temple at Trongsa in 1543. The landscape around Trongsa is spectacular, and for miles on the end the Dzong seems to tease you so that you wonder if you will ever reach Trongsa. The view extends for many kilometers and in the former times, nothing could escape the vigilance of its watchmen.

The Bumthang region encompasses four major valleys: Choskhor, Tang, Ura and Chhume. The Dzongs and the most important temples are in the large Choskhor valley, commonly referred to as Bumthang valley. There are two versions of the origin of the name Bumthang. The valley is supposed to be shaped like a Gompa, a vessel that contains holy water, and Thang meaning flat place

The Mongar district is the northern portion of the ancient region of Kheng. Mongar is the district headquarters and hardly more than a stopping place surrounded by fields of maize. It is also the first town built in a mountain side instead of in a valley, a characteristic of eastern Bhutan where the valleys are usually little more than riverbeds and mountain slopes which rise abruptly from the rivers, flatten out as they approach their summits. One would never imagine that the upper parts of the mountains are so densely populated.

Places to visit in Mongar:
1.  Dramtse Gompa
2.  Mongar Dzong  the upper parts of the mountains are so densely populated.

Lhuentse is an isolated district although there are many sizeable villages in the hill throughout the region. It is very rural and there are fewer than five vehicles, including an ambulance, and not a single petrol station, in the whole district.

Trashigang is one of the most densely populated districts in Bhutan. After Thimphu, Trashigang is the biggest urban center in mountainous Bhutan. It is the heart of eastern Bhutan and was once the center of important trade with Tibet. There are several gompas and villages that make a visit worthwhile, but it is a remote region and requires a lot of driving to reach.

Paro Airport is the only international airport in Bhutan. Yongphulla Airport in Trashigang is a small domestic airport that underwent upgrades through 2010. Yongphulla Airport was scheduled for completion in January 2010 but as of January 2015, the airport remains closed due to ongoing runway repair. There are plans for further domestic airports to be built at Bathpalathang in Bumthang District and at Gelephu in Sarpang District, which were due to start operations in June 2011.

Bhutan does not have any railways, though it has entered into an agreement with India to link southern Bhutan to India's vast network by constructing an 11-mile (18 km)-long 1,676 mm (5 ft 6 in) broad gauge rail link between Hashimara in West Bengal and Toribari in Bhutan. The construction of the railway via through Satali, Bharna Bari and Dalsingpara by Indian railways is being funded by India.